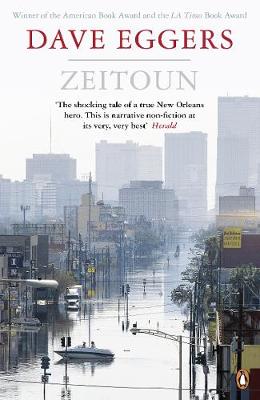 'Harrowing, spellbinding . . . nothing less than an indictment of the entire Bush era.' Observer 'Shocking.' The Times In August, 2005, as Hurricane Katrina blew in, the city of New Orleans had been abandoned by most citizens. But resident Abdulrahman Zeitoun, though his wife and family had gone, refused to leave. For days he traversed an apocalyptic landscape of flooded streets by canoe. He protected neighbours' properties, fed trapped dogs and rescued survivors. But eventually he came to the attention of those 'guarding' this drowned city. Only then did Zeitoun's nightmare really begin. Zeitoun is the powerful, ultimately uplifting true story of one man's courage when confronted with an awesome force of nature followed by more troubling human oppression. 'Terrifying.' Observer 'Eggers uses Zeitoun's eyes to report on America's reasonless post-Katrina world. Reminiscent of Gabriel Garcia Marquez's documentaries, this is a true story told with the skills of a master of fiction. Immensely readable.' Independent 'Masterly. Brilliantly crafted, powerfully written and deftly reported.' Guardian 'The stuff of great narrative non-fiction. Fifty years from now, when people want to know what happened to this once-great city they will be talking about Zeitoun.' New York Times Book Review 'Riveting.' Vanity Fair 'A peerless piece of reporting of paranoia, Islamophobia, and an unravelling city.' Esquire