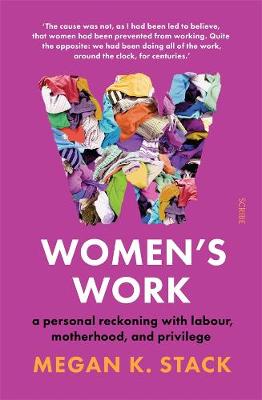 After her first book was published to acclaim, journalist Megan K. Stack got pregnant and quit her job to write. She pictured herself pen in hand while the baby napped, but instead found herself traumatised by a difficult birth and shell-shocked by the start of motherhood.

Living abroad provided her with access to affordable domestic labour, and, sure enough, hiring a nanny gave her back the ability to work. At first, Megan thought she had little in common with the women she hired. They were important to her because they made her free. She wanted them to be happy, but she didn't want to know the details of their lives. That didn't work for long.

When Pooja, an Indian nanny who had been absorbed into the family, disappeared one night with no explanation, Megan was forced to confront the truth- these women were not replaceable, and her life had become inextricably intertwined with theirs. She set off on a journey to find out where they really come from and understand the global and personal implications of wages paid, services received, and emotional boundaries drawn in the home. As she writes herself- 'Somebody should investigate. Somebody should write about all of this. But this is my life. If I investigate, I must stand for examination. If I interrogate, I'll be the one who has to answer.'

'Megan Stack is willing to confront hard questions that so many of us flinch from- the relationships between women and the women we hire to take care of our houses and our children, to do the traditional women's work that gives "liberated women" the time to do traditional men's work. Women's Work is a book of vivid characters, engrossing stories, shrewd insights, and uncomfortable reflections.'
- Anne-Marie Slaughter, President & CEO of New America, and author of Unfinished Business

'Women's Work is an incredible follow-up to Megan Stack's celebrated book of war reportage, Every Man in This Village Is a Liar. It is a fierce and furious and darkly funny book about the costs of motherhood- the psychological costs, the costs in time and energy and spirit, and finally the costs imposed on other women, most of them also mothers, who leave their own children so they can take care of ours. I can't think of a work that speaks more directly to our age of increasing inequality, starting with housework and child care, the oldest inequalities of all.'
- Keith Gessen, author of A Terrible Country


'A self-critical and heartfelt narrative ... beautifully written, informative, and sometimes harrowing as she recounts the joy, fear, and exhaustion of becoming a mother. What women - and men - can learn from Stack's story is that "women's work", in all of its complexity and construction, should not be only for women.' STARRED REVIEW
- Kirkus