Waters of the World: The story of the scientists who unravelled the mysteries of our seas, glaciers, and 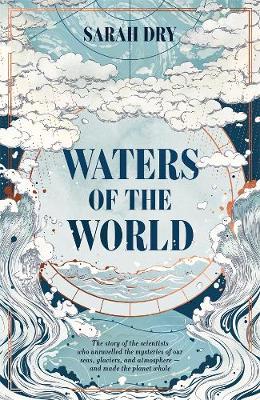 A BOOK OF THE YEAR FOR NATURE AND THE CHICAGO REVIEW OF BOOKS.

How is the climate where you are? And how did it get that way? How does the great complex global interaction of ice, ocean, and atmosphere combine to generate the rain that sustains us? And who figured all its secret processes out?

Waters of the World is a tour through 150 years of the history of a significant but underappreciated idea- that the Earth has a global climate system made up of interconnected parts, constantly changing on all scales of both time and space. A prerequisite for the discovery of global warming and climate change, this idea was forged by scientists studying water in its myriad forms. This is their story.

Linking the history of the planet with the lives of those who studied it, Sarah Dry follows the remarkable scientists who ascended volcanic peaks to peer through an atmosphere's worth of water vapour, cored mile-thick ice sheets to uncover the Earth's ancient climate history, and flew inside storm clouds to understand how small changes in energy can produce both massive storms and the general circulation of the Earth's atmosphere. Each toiled on his or her own corner of the planetary puzzle. Gradually, their cumulative discoveries coalesced into a unified working theory of our planet's climate.

We now call this field climate science, and in recent years it has provoked great passions, anxieties, and warnings. But no less than the object of its study, the science of water and climate is - and always has been - evolving. By revealing the complexity of this history, Waters of the World delivers a better understanding of our planet's climate at a time when we need it the most.

'Waters of the World sparkles with lyricism and wit. Dry is a gifted storyteller, and her research into the pre-history of Earth system science has turned up gripping tales of risk, adventure, defiance, and discovery. A unique and important book.'
-Deborah R. Coen, author of Climate in Motion- science, empire, and the problem of scale

'An account of the two-hundred-year effort to understand the world's climate system, Waters of the World is not only timely but also one of the most beautifully written books on science that I have seen in a long time. It is one thing to communicate this complex and important topic lucidly, but quite another to make the material seductive, poetic, enthralling. I was left wanting to read John Tyndall's writings on ice, to hear the epic creak of Alpine glaciers, to go cloud-spotting off Tenerife and float parsnips in Scottish lochs. Describing one of the most vital but least visible histories in modern science, and rescuing from neglect a host of pioneers who helped us to see how our planet works, it is a remarkable achievement.'
-Philip Ball, author of H2O- a biography of water and The Water Kingdom- a secret history of China

'In this cleverly argued and brilliantly written history, Dry traces the interaction between the dramatic careers of six major figures in the history of climatology and the uneven and surprising emergence of a science of climate since the mid-nineteenth century. The book illuminates its history with tales of mountain climbing and dramatic voyages, of tell-tale ice cores and threatening hurricanes. No set of stories could be more urgent now and in need of the care and intelligence with which they are told here. In showing how the focus of these engaging and energetic scientists and their many colleagues gradually shifted from a collective search for the principles of a global climate system to visions of dynamic, interactive and unstable climates in change, this book has much to teach about the roots of the most reliable knowledge of climate and how it should be best understood in its full historical and cultural setting.'
-Simon Schaffer, Professor of the history and philosophy of science, University of Cambridge