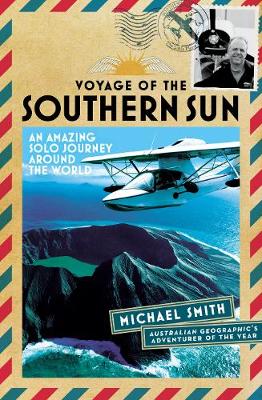 'The blue-sky dreaming of Walter Mitty, the resourcefulness of Phileas Fogg and - dare I say it? - the over-confidence and geniality of Mr Toad in a flying machine. Surely these literary figures were the inspiration for such an adventure. A marvellous exploit and wonderfully told.'
-A.J. Mackinnon, author The Unlikely Voyage of Jack de Crow

'Great Aussie spirit in a good old-fashioned, seat-of-the-pants adventure - a remarkable journey retracing the golden era of aviation, for both the Southern Sun and Michael Smith, who is very lucky to be alive.' -Dick Smith

University dropout Michael Smith built a multimillion-dollar business fitting out movie theatres around the world, before restoring Melbourne's Sun Theatre and becoming one of the country's last independent cinema operators. After a business deal went bad, and shaken by how close he had come to being wiped out, Smith took an even bigger risk- to become the first person to fly solo around the world in an amphibious plane, retracing the 1938 Qantas, Imperial and Pan Am flying boat routes between Sydney, Southampton and New York.

With limited flying experience, no support team and only basic instruments in his tiny single-engine flying boat, the Southern Sun, Smith risked his life to make modern aviation history. His adventures include an unexpected greeting by Special Branch on his arrival in the UK, a near-death experience while leaving Greenland, and a journey up the Mississippi, landing on the river and sleeping on sandbanks at night. He made eighty stops on his flight around the globe, exploring cities and communities, as well as visiting some seventy cinemas. All along the way Smith was updating his online journal, cheered on by more than 50,000 followers.

This is the incredible story of his journey.