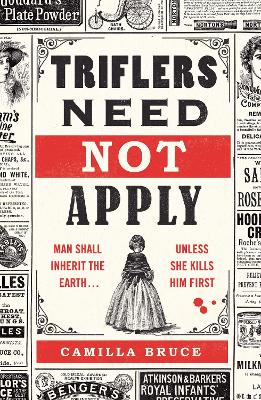 In 1900, who would believe a woman capable of killing two husbands and forty other men?

Sorenson dies of a cerebral hemorrhage on that very day. According to his wife, Belle Gunness, he had come home from work with a terrible headache. She said she gave him quinine powder, a common remedy, and went to prepare dinner. When she returned to check on him, she said, he was dead.

Belle remarries, this time to a much-younger man. Eight months later, Peter Gunness is also dead, the back of his skull smashed in.

In 1906, a series of personal ads begin to appear in a local Midwest newspaper. Belle is looking for investors for her farm. None of the men who answer her ad are ever seen again . . .

In a dazzlingly original and chilling reimagining of the life of Belle Gunness, the original black widow, Camilla Bruce opens the door to the mind of a female serial killer, where murderous scheming and the darkest of thoughts reside.