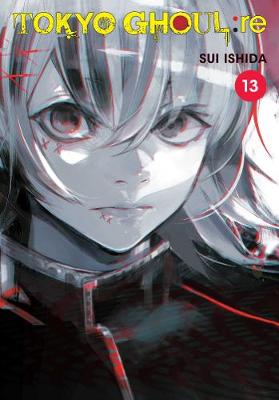 In the world of Tokyo Ghoul, sometimes the only way to fight monsters is to become one...

The Commission of Counter Ghoul is the only organization fighting the Ghoul menace, and they will use every tool at their disposal to protect humanity from its ultimate predator. Their newest weapon in this hidden war is an experimental procedure that implants human investigators with a Ghoul's Kagune, giving them Ghoul powers and abilities. But both the procedure and the newly formed Qs Squad are untested. Will they become heroes...or monsters?!

Furuta has finally gone too far in his mad power grab at the CCG. Disgusted at his abuse of Countermeasure Law, Urie and a group of investigators decide to take him down. When they confront him, it becomes clear that Furuta is himself a Ghoul. Overthrown and fleeing the threat of eradication, Furuta takes out his rage on the Goat stronghold. And in the ensuing carnage, Kaneki is forced to make a horrible, fateful decision...