This Day in Collecting History: A Year of Art, Memorabilia and Other Treasures Sold 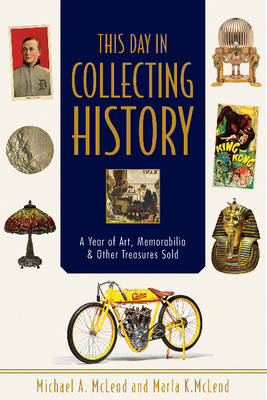 A calendar year's worth of historical events are presented along with auctions of related collectibles in this fun and informative compilation. The day-by-day historical entries and corresponding sales are arranged chronologically from January 1 to December 31. Many of the sales, both public and private, were for fabulous sums. The Cowardly Lion's costume from The Wizard of Oz auctioned for $3+ million. Joan of Arc's ring sold for almost $425,000. The most expensive album wasn't by the Beatles, but by Wu-Tang Clan, whose Once Upon a Time in Shaolin sold for a reported $2 million. More than 650 images further illustrate the antiques, artworks, pop culture memorabilia, and ephemera. Did you know the largest sum paid for an artwork by a living artist was more than $57 million? Look at the November 12 listing to find out more. AUTHOR: Mike McLeod has been the editor of Southeastern Antiquing and Collecting Magazine for 16 years. His wife, Marla McLeod, inspired him to write this book and was the fact checker. They have been married for 36 years and are the parents of five children. Marla was born and raised in Idaho and Mike in Alabama. Before marriage, Mike served in the Marine Corps for four years, two in Spain. He also served a two-year mission for The Church of Jesus Christ of Latter-day Saints on the Navajo Reservation, teaching in Navajo. Marla was raised on a potato farm in Idaho. She has mastered many handcrafts including tatting, chair caning, macrame, basket weaving, clay pot making, sewing, quilting, knitting, needlepoint, and the like. They have eight grandchildren. 679 b/w and colour images