The Nature of a Woman Navigating Her 4 Week Mood Cycle 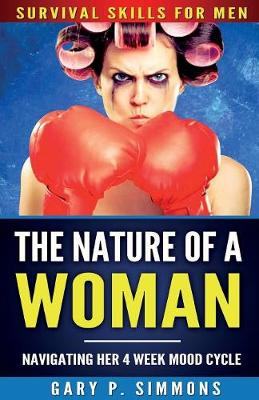 This book contains a lot of clear and practical advice for men who feel they have an unhappy marriage and could do with some relationship help.

At aged 45, Gary P. Simmons had left countless failed relationships in his wake.

He thought that he was never going to find 'The One', a partner to share his life with.

And then one day, 'SHE' walked through the door. At last... things were great!

That was until after a few months of dating, when a casual conversation deteriorated into an argument, where she said, "this relationship doesn't work for me. It's over!"

Then, a few days later she wanted him back.

In shock and confused as to why his partner's feelings for him were so erratic, he was once again faced with the familiar pain of being misunderstood, disrespected and frustrated.

Gary knew from his early career, working with men in dockyards, mining camps, and the oil industry, that the guys who blamed their partners for failed relationships, who said they have a "crazy wife" or a "nagging wife", were the men who became bitter, angry, resentful... and lonely.

There didn't seem to be much advice for men on this issue out there, so Gary decided it was time to do some serious research of his own, as well as some soul searching, to find out what was really going on and why his relationships were so difficult.

Eventually, he made an incredible discovery about women which he realized the vast majority of men had no idea about. Gary knew this research could also be helpful to other men who were committed to saving a marriage.

'The Nature of a Woman' is real and it's biological. It's also obvious when you know what you're looking for (as long as your committed to having a loving wife).

Now a happy husband whose been married for over 10 years, Gary reveals the key to being in a successful long-term relationship.

There's no fluff in this book. It's plain and simple and full of down to earth relationship advice for men who are married to a woman, who genuinely want to learn skills that can be applied to help make a partnership loving and harmonious.

It's clear from this book that Gary respects and relates to both men and women and that his intention is to help keep couples and families together. He says "my aim is to inspire couples to be invested in saving a marriage, rather than walking away, if things are not going as well as they could be at home".

Although this transformational book has been written for men, it's also a book that women want their partner to read because it helps to inspire guys to choose to become the type of man that women respect, admire and need.