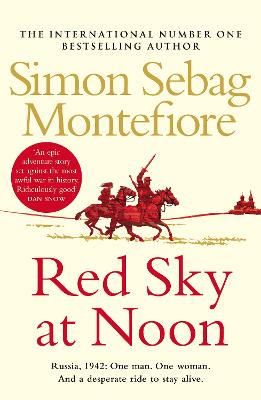 'An epic adventure story set against the most awful war in history. Ridiculously good' Dan Snow

'The black earth was already baking and the sun was just rising when they mounted their horses and rode across the grasslands towards the horizon on fire ...'

Imprisoned in the Gulags for a crime he did not commit, Benya Golden joins a penal battalion made up of Cossacks and convicts to fight the Nazis.

He enrols in the Russian cavalry, and on a hot summer day in July 1942, he and his band of brothers are sent on a desperate mission behind enemy lines.

Switching between Benya's war in the grasslands of Southern Russia, and Stalin's plans in the Kremlin, between Benya's intense affair with an Italian nurse and a romance between Stalin's daughter and a journalist also on the Eastern Front, this is a sweeping story of passion, bravery and human survival where personal betrayal is a constant companion, and death just a heartbeat away.

Praise for Red Sky at Noon

'Red Sky at Noon is an epic adventure story set against the backdrop of the most awful war in human history. The master historian shape-shifting into the brilliant novelist. Ridiculously good'. Dan Snow

'Mythic and murderous violence in Russia...there are power-drunk Nazis and Soviet traitors, including a particularly memorable villain ...Written with brio & deep knowledge of its fascinating subject matter... a deeply satisfying pageturner.' - Book of the Month, The Times

'In this third volume of The Moscow Trilogy, the fate of combatants and civilians is often harsh. With his feel for vivid and immediate drama and impressive research, the author evokes the extreme turbulence and violence impacting on individuals. Writing with passion, Montefiore makes the point that, up against the huge forces of war, the struggle for personal resolution can be tragic - but never wasted.' - Daily Mail

'The final instalment of Montefiore's loosely connected Moscow Trilogy- amidst the killing and the chaos, a group of prisoners are offered a chance of redemption on a secret mission behind enemy lines on horseback. Montefiore has a keen sense of place and an eye of unexpected details. Switching between the frontline on the Russian steppes and Stalin in the Kremlin, this is an EXCITING FAST-PACED ADVENTURE AND A LAMENT FOR LOVE IN DARK AND BRUTAL TIMES.' - Mail on Sunday

'I devoured Red Sky at Noon. A heartstopping, heartbreaking, technicolour epic. A grand homage to the Russian masters Babel & Grossman, echoes of Hemingway & Dostoevsky, and a propulsive delight that is entirely Montefiore's own. Gripping storytelling allied with intimate, unsqueamish knowledge of Russian history - a special combination.' - AD Miller, author of Snowdrops

'The gripping final instalment of the Moscow Trilogy tells of a man wrongly imprisoned in the Gulags and his fight for redemption. Love in dark times, meticulously researched... In this searing tale of love and war, most moving is the redemptive relationship between a soldier and a nurse that blooms amid the brutality. An homage to the author's favourite Russian writers and the Western masterpieces of Larry McMurtry, Cormac McCarthy and Elmore Leonard, such influences pervade this atmospheric tale told in the author's distinct own voice.' - Observer