Poached: Inside the Dark World of Wildlife Trafficking 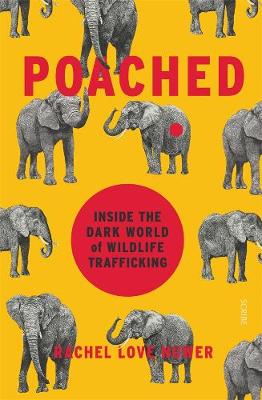 An intrepid investigation of the criminal world of wildlife trafficking - the poachers, the traders, and the customers - and of those fighting against it.

Journalist Rachel Love Nuwer plunges the reader into the underground of global wildlife trafficking, a topic she has been investigating for nearly a decade. Our insatiable demand for animals - for jewellery, pets, medicine, meat, trophies, and fur - is driving a worldwide poaching epidemic, threatening the continued existence of countless species. Illegal wildlife trade now ranks among the largest contraband industries in the world, yet compared to drug, arms, or human trafficking, the wildlife crisis has received scant attention and support, leaving it up to passionate individuals fighting on the ground to try to ensure that elephants, tigers, rhinos, and more are still around for future generations.

Poached takes readers to the front lines of the trade- to killing fields in Africa, traditional-medicine black markets in China, and wild-meat restaurants in Vietnam. Through exhaustive first-hand reporting that took her to ten countries, Nuwer explores the forces currently driving demand for animals and their parts; the toll that demand is extracting on species across the planet; and the conservationists, rangers, and activists who are working to stop the impending extinctions - people who believe this is a battle that can be won, that our animals are not beyond salvation.

'A revelation of a book- Rachel Nuwer pulls back the curtain of dry statistics to reveal the illegal and sordid world of wildlife trafficking as well as the valiant efforts to stem the tide. A firsthand account that is hard to put down.'
-Thomas E. Lovejoy, President, International Union For The Conservation Of Nature - US

'Poached describes all kinds of heart-wrenching and harrowing moments, but Ms. Nuwer often strikes a lighthearted tone, finding eccentric detail to splash in ... by focusing on the humans at all points of the trade, Ms. Nuwer is able to offer something rare- a window onto the feelings and beliefs that drive it.'
-Jennie Erin Smith, The Wall Street Journal

'Poached gives readers an up-front look at the vulnerability of endangered animals that are worth more dead than alive ... But these anecdotes aren't just for shock value. Nuwer also documents the political, cultural, and economic factors driving wildlife trafficking ... her takeaway is abundantly clear- This business has major consequences ... Nuwer ... show s how obsession, especially when profit is involved, can be a dark force.'
-Simon Caterson, Sydney Morning Herald