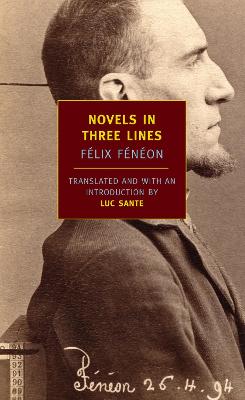 Novels in Three Lines collects more than a thousand items that appeared anonymously in the French newspaper Le Matin in 1906-true stories of murder, mayhem, and everyday life presented with a ruthless economy that provokes laughter even as it shocks. This extraordinary trove, undiscovered until the 1940s and here translated for the first time into English, is the work of the mysterious Felix Feneon. Dandy, anarchist, and critic of genius, the discoverer of Georges Seurat and the first French publisher of James Joyce, Feneon carefully maintained his own anonymity, toiling for years as an obscure clerk in the French War Department. Novels in Three Lines is his secret chef-d'oeuvre, a work of strange and singular art that brings back the long-ago year of 1906 with the haunting immediacy of a photograph while looking forward to such disparate works as Walter Benjamin's Arcades Project and the Death and Disaster series of Andy Warhol.