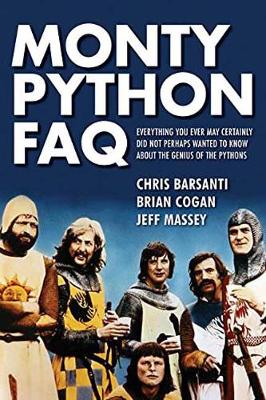 Monty Python FAQ burrows into the pulsing heart of the Python s corpus of work and emerges, bloody but unbowed, with a book that tells you everything you positively, absolutely need to know about this fascinating, maddening, overeducated, but relentlessly silly comedic troupe. Since premiering on television in England on October 5, 1969, Monty Python s Flying Circus has been regarded as one of the most ground-breaking programs in television history. The Pythons brand of comedy burned bright and fast, with just four seasons of their TV show, five feature and concert films, and a dozen or so albums. They inspired nearly every comedy group that came after (from Saturday Night Live, The Kids in the Hall, and South Park to Mr. Show and Key and Peele) but their comedy has never been duplicated. That is not, however, for lack of trying: witness the legions of fans eager to belt out quotes at the drop of a hat. Monty Python FAQ will guide fans as well as those new to the Pythons through the academic roots of Monty Python all the way to Monty Python on Broadway. The book features chapters on the Pythons arrival in America, the production of Monty Python and the Holy Grail, and the philosophy of Python, as well as covering the solo careers of the members and their work post-Python. Monty Python FAQ is the ultimate guide to everything you never needed to know about this visionary comedic group: know what we mean?!