Money In The Morgue 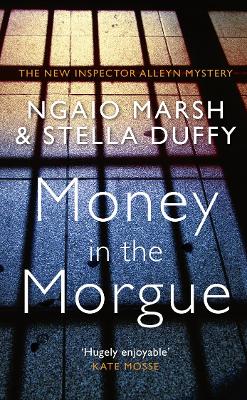 Roderick Alleyn is back in this unique crime novel begun by Ngaio Marsh during the Second World War and now completed by Stella Duffy in a way that has delighted reviewers and critics alike.

It's business as usual for Mr Glossop as he does his regular round delivering wages to government buildings scattered across New Zealand's lonely Canterbury plains. But when his car breaks down he is stranded for the night at the isolated Mount Seager Hospital, with the telephone lines down, a storm on its way and the nearby river about to burst its banks.

Trapped with him at Mount Seager are a group of quarantined soldiers with a serious case of cabin fever, three young employees embroiled in a tense love triangle, a dying elderly man, an elusive patient whose origins remain a mystery ... and a potential killer.

When the payroll disappears from a locked safe and the hospital's death toll starts to rise faster than normal, can the appearance of an English detective working in counterespionage be just a lucky coincidence - or is something more sinister afoot?