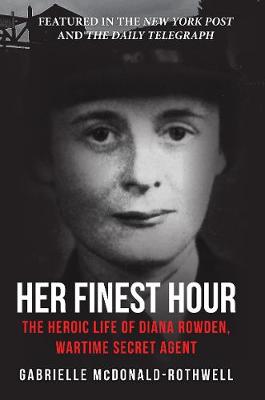 Diana Rowden was a woman of the finest character. As an agent with the Special Operations Executive (SOE), she was dropped into France alongside Noor Inayat Khan and worked in the Resistance stronghold of the Franche-Comte department. Hunted at every turn by the Gestapo, Diana worked tirelessly for the Allied war effort, playing a part in the sabotage of the Peugeot factory at Sochaux and delivering frequent radio messages. In the ultimate tale of intrigue, Gabrielle McDonald-Rothwell relates how Diana's escapades ended in betrayal by one of her own colleagues, and describes the final desperation of the concentration camp where her war ended. This full biography, untold until now, attempts for the first time to honour Diana's service to her country. At a time when the use of female secret agents was controversial and marred by establishment prejudices, Diana's tragic life is here given its full recognition. Although she was later Mentioned in Despatches and awarded an MBE and the Croix de Guerre, this little known individual has all but vanished from the annals of Second World War history. This is a story of a woman who, with a singular bravery and devotion to duty, distinguished herself as one of the SOE's finest agents.