Five Years Ahead of My Time 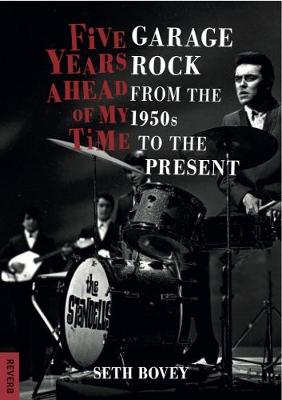 Five Years Ahead of My Time: Garage Rock from the 1950s to the Present tells of a musical phenomenon whose continuing influence on global popular culture is immeasurable.

The story begins in 1950s America, when classic rock 'n' roll was reaching middle age, and teenaged musicians kept its primal rawness going with rough-hewn instrumentals, practicing guitar riffs in their parents' garages. In the mid-1960s came the Beatles and the British Invasion, and soon every neighborhood had its own garage band. Groups like the Sonics and 13th Floor Elevators burnt brightly but briefly, only to be rediscovered by a new generation of connoisseurs in the 1970s. Numerous compilation albums followed, spearheaded by Lenny Kaye's iconic Nuggets, which resulted in a garage rock's rebirth during the 1980s and '90s.

Be it the White Stripes or the Black Keys, bands have consistently found inspiration in the simplicity and energy of garage rock. It is a revitalizing force, looking back to the past to forge the future of rock 'n' roll. And this, for the first time, is its story.