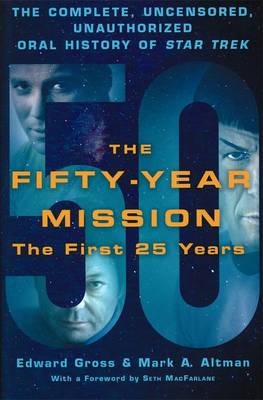 Truth is Stranger Than Science Fiction

The incredible, definitive true story of the making of fifty years of Star Trek . . . in the words of those who made it!

This is the remarkable unauthorized, uncensored and definitive true story behind the making of a television legend. There have been many books written about Star Trek but never a volume with the unprecedented access, insight, and candor of authors Edward Gross and Mark A. Altman. Having covered the franchise for more than three decades, they've assembled the ultimate guide to a television classic that serves as the final world on this unique pop-culture phenomena.

The Fifty-Year Mission includes the voices of hundreds of television and film executives, programmers, writers, directors, creators, and cast members who were all part of Star Trek's first twenty-five years.

And this isn't just a book for Star Trek fans. This is a volume that will engage fans of television, movies, and pop culture who are interested in the nuts and bolts, the trials and the tribulations of making an enduring television classic.