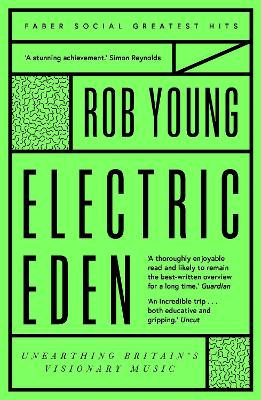 In a sweeping panorama of Albion's soundscape that takes in the pioneer spirit of Cecil Sharp; the pastoral classicism of Ralph Vaughan Williams and Peter Warlock; the industrial folk revival of Ewan MacColl and A. L. Lloyd; the folk-rock of Fairport Convention, Sandy Denny, Nick Drake, Shirley Collins, John Martyn and Pentangle; the bucolic psychedelia of The Incredible String Band, The Beatles and Pink Floyd; the acid folk of Comus, Forest, Mr Fox and Trees; The Wicker Man and occult folklore; the early Glastonbury and Stonehenge festivals; and the visionary pop of Kate Bush, Julian Cope and Talk Talk, Electric Eden maps out a native British musical voice that reflects the complex relationships between town and country, progress and nostalgia, radicalism and conservatism.

An attempt to isolate the 'Britishness' of British music - a wild combination of pagan echoes, spiritual quest, imaginative time-travel, pastoral innocence and electrified creativity - Electric Eden will be treasured by anyone interested in the tangled story of Britain's folk music and Arcadian dreams.