Crossing California: A Cultural Topography of a Land of Wonder and Weirdness 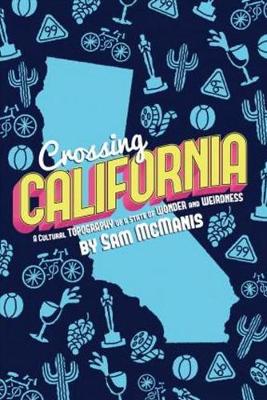 Sacramento Bee journalist Sam McManis travels to every corner of California, seeking the unusual and the eccentric. He finds there is more than one California - but every different California is equally weird and wonderful. Sacramento Bee journalist Sam McManis spent five years on the road trying to find the real California. He discovered that there is more than one California, but every different California is equally weird and wonderful. Worlds collide and commingle: the neo-hippies with the rednecked farmers; the urban sophisticates with the quirky desert dwellers; the Hollywood power brokers with the outsider artists. Brought together in a bouillabaisse of voices, Crossing California will make you see the state in an entirely new light. From the briny scent of Fisherman's Wharf to the fragrant sage scrub of Imperial County; from the otherworldly starkness of Death Valley to the crashing waves and flexing muscles at Venice Beach, Crossing California gives readers a first-hand experience. McManis has stalked the tony aisles of the newly minted Broad Museum in gentrified downtown Los Angeles, and quick-footed it through the International Banana Museum along the desiccated shores of the moonscaped Salton Sea. He has inadvertently gotten his car stuck in a tree at a cheesy drive-thru giant Sequoia roadside attraction along the hemp highway between Mendocino and Humboldt, and witnessed, with both fascination and can't-look-away horror, grown men and women, sans children and sans inhibitions, belt out full-throated versions of "Let It Go" at a Disneyland sing-along. All told, Crossing California is a trip. AUTHOR: Sam McManis is a former columnist and feature writer for the Sacramento Bee. He is a four-time winner of the Society of Features Journalism awards and three-time Best of the West honoree. He also has been a staff writer and editor at the San Francisco Chronicle and a sportswriter for the Los Angeles Times. His profiles and essays have appeared in the New York Times, Wall Street Journal and elsewhere. SELLING POINTS: . A thoroughly unstereotyped and fresh take on California eccentricity. . Depicts intriguing and hilarious people, places, and events that give an authentic taste of the real California.