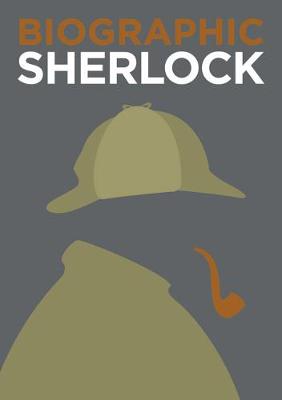 ** The first Biographic of a fictional character ** The Biographic series presents an entirely new way of looking at the lives of the world's greatest thinkers and creatives. It takes the 50 defining facts, dates, thoughts, habits and achievements of each subject, and uses infographics to convey all of them in vivid snapshots. Each Biographic title is designed to be as entertaining as it is informative. Timelines not only pinpoint significant dates, but set them in the context and culture of their times. Dynamic maps locate biographical events alongside other points of interest. Character traits are illuminated by visual comparisons. Many people know that Sherlock Holmes was an enigmatic detective who, with his companion Dr Watson, pursued criminals through Victorian and Edwardian England. What, perhaps, they don't know is that he investigated 60 fully documented cases, including 37 murders; that 46 of those cases began in his offices at 221B Baker Street; that only three of them involved his nemesis Moriarty; and that in his later years Holmes spent his time beekeeping on the Sussex Downs. Biographic: Sherlock presents an investigative guide to his life and work, with an array of clues and observations converted into infographics to reveal the detective behind the detection. SELLING POINTS: Sherlock Holmes through 50 defining facts, thoughts, habits and achievements Entertaining and informative infographics Stylish gift for lovers of classic fiction 150 illustrations