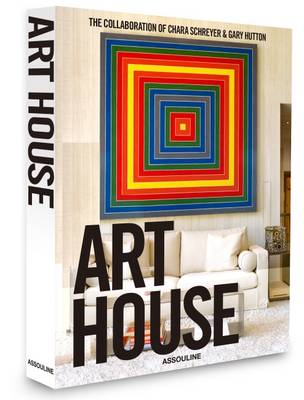 It's about collecting work by people who have positively changed the course of history. - Chara Schreyer Based on research, new acquisitions, and an occasional midnight inspiration, Schreyer constantly refines the placement of pieces, deepening dialogues and exploring juxtapositions until the installations sing. The collection is her own masterpiece. Alisa Carroll Leading art collector Chara Schreyer's forty-year collaboration with interior designer Gary Hutton has produced fi residences designed to house six hundred works of art, including masterpieces by Marcel Duchamp, Andy Warhol, Donald Judd, Louise Nevelson, Diane Arbus, and Frank Stella. 'Art House' takes readers on a breathtaking visual tour of these stunning spaces, which range from an architectural tour-de-force to a high-rise "gallery as home." Schreyer has been known to construct her abodes based on art how well her favourite Donald Judd sculpture can be accommodated, for example. Intrigued by art because of the psychology behind it, her unique perspective has greatly influenced which pieces find their way into her possession. Each work, no matter its placement, is given its own spot in the limelight complete with museum- standard lighting for visitors to enjoy, including friends, family, artists, and of course Schreyer herself. An exploration of a life devoted to living with art and to designing homes that honour it, 'Art House' is an inspiration for art and design lovers alike. AUTHOR: Nationally renowned photographer Matthew Millman has been photographing architecture and design for nearly twenty-five years. His work has appeared in publications such as The New York Times, Architectural Digest, Dwell, Elle Decor, and Cultured. He has also photographed for numerous books, including West Coast Modern, Inner Spaces, and Jay Jeff Collected Cool. Millman regularly photographs with institutions such as SFMOMA and the Oakland Museum of California. Alisa Carroll is editor in chief of SFCandG, San Francisco's leading interior design magazine, and has written on art and design for many publications. Her first book, 'Jay Jeff Collected Cool', was published by Rizzoli in 2014. 150 illustrations