Almost Human A Biography of Julius the Chimpanzee 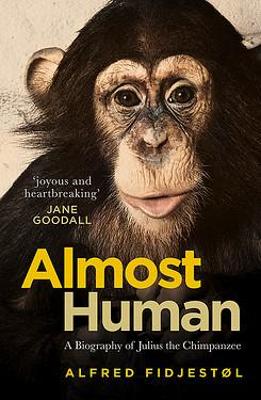 ALMOST HUMAN tells the remarkable story of Julius the chimpanzee, born in the Kristiansand Zoo in Norway, and rejected by his mother at just six weeks old. The zoo director and his family fostered Julius with the aim of returning him to his tribe, but Julius wasn't in any rush to reconnect and the tribe repeatedly snubbed him. Despite regular attempts to reintroduce Julius to zoo life, he often returned to his human home.

Julius' story soon caught the imagination of the Norwegian people and he became the star of his own TV show - the nation following his story as he grew up. Finally, after twenty-five turbulent years that saw daring escape attempts, failed relationships, rejection and injury, Julius was settled into a different chimpanzee tribe. Today, at almost forty years old, he enjoys life as a contented alpha chimpanzee with two of his own offspring.

ALMOST HUMAN explores more than this unique chimpanzee's life - it examines how our treatment of animals in captivity has changed over the decades, how the mind of a chimpanzee works, and how much we have in common with the primates who share 98.6% of our DNA. This powerful story shows how Julius was faced with the very same challenges we humans experience - the need for food and safety, the desire for love and sex, how to negotiate status and power, and finding ways to deal with loneliness, sorrow and death. It reminds us that what we all require is very simple: a loving family and a place to call home.

'Alternately joyous and heartbreaking, ALMOST HUMAN is more than just a biography of a confused chimpanzee. It is also a fascinating, well-researched book that provides excellent information about wild and zoo chimpanzees, the history of trafficking live chimpanzee infants out of Africa, and the dramatic change in the way animals have been perceived and treated in zoos over the past century.' Jane Goodall

'... ALMOST HUMAN is a superbly written book that has something of profound importance to say about our relationship with animals, whose existence increasingly we are both defining and curtailing. I doubt there will be a more moving and disturbing celebrity biography published any time soon.' SYDNEY MORNING HERALD